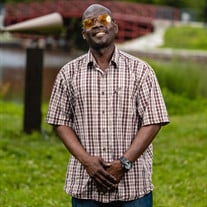 Jacques Dhonald Pierre, 48, Worcester (formerly of Boston), passed away peacefully in his sleep with his partner by his side, early Monday morning, March 15, 2021 at UMass Medical Center after a 2 ½ year battle with stage 4 stomach cancer. He was born in Boston, MA, sharing the day with a full solar eclipse, July 10, 1972, a son of Monfort and Josette Pierre, Haitian immigrants. He graduated from Cathedral High School with the class of 1990. Jacques studied at Mount Ida, UMass Boston, and Massachusetts College of Communications. His inquisitive mind was best satisfied with his own research. If you had a question, and some time, he’d lay it all out for you. From Ancient Civilizations, KMT, The Scramble for Africa, to the best juicer on the market. A great conversationalist, any topic. Jacques was a b boy. A talented graffiti writer. An mc who went by the name MagicMc. He organized a movement through his crew The Get Tuff Crew, the WiseMen, performing at Carver Den, Club Chet’s, The SkyCap and The Strand Theater. Jacques’ conscious lyrics were ahead of the times. Kingsound Forever. Jacques showed a keen interest and enthusiasm for the mystical and supernatural phenomena. He truly believed that celestial bodies have an influence on our lives and the natural world. He also believed that personal development in one’s life, developing one’s potential, enhances their quality of life. Hence, making him the spiritual man that he became in his adult life. He claims his life became complete with the birth of his daughter in 2015 and he cherished every second they spent together. Jacques would want to give love to his family at Beth Israel Deaconess Medical Center, where he worked from 2002. He is survived by his daugher, his greatest love, his miracle, Mia Grace Pierre. Her mother, his partner in love, Christina Roberts. His adoring mother, Josette Pierre. His brother and best friend, Rhonald Pierre. His niece, Su’Naya Pierre. His Aunt, “Matante” Anne St.Pierre and dearest cousin, Dominique St.Pierre. His friend, Anthony Walker. His very much loved, extended family and friends. Jacques loved us just as we are, and asked that we love the same. Chill. Bishop Funeral Home on 71 Pleasant St in Worcester Ma is honored to assist the family with arrangements. For everyone’s safety, there are no public calling hours or services. A celebration of life will be held in July. Expressions of sympathy in memory of Jacques may be made to the Go Fund Me organized by those who love Jacques and his family. https://gofund.me/6b99a033 His ashes will be spread off the coast of Africa as well as remain here with us.

Jacques Dhonald Pierre, 48, Worcester (formerly of Boston), passed away peacefully in his sleep with his partner by his side, early Monday morning, March 15, 2021 at UMass Medical Center after a 2 ½ year battle with stage 4 stomach cancer. He... View Obituary & Service Information

The family of Jacques Dhonald Pierre created this Life Tributes page to make it easy to share your memories.

Send flowers to the Pierre family.