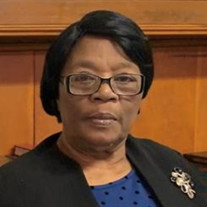 Mrs. Marie Emie Joseph Octavius was born in the county of Maniche, Haiti on February 25, 1954 from a devoted Baptist family. She was the third child born from the union of Mr. Estilhomme and Mrs. Dieudila Joseph. She attended the Baptist church’s school, but to keep up with the custom of the time, the older girl had to stay home and help with house chores. However, her parents sent her to a vocational center located in Maniche where she specialized in sewing and embroidering which became her favorite skill. On December 29, 1977, she married Mr. Elie Octavius. Together they had five children: Elympse, Emlex, Echarson, and Ewalding. She was pre-deceased by her youngest son Esdras. On May 29, 2011 Emie and her husband migrated to the US and settled at first in Clinton, Massachusetts, to join their elder son Elympse and their only daughter Ewalding who were already in the US. Emie, at an early age, became very involved in the Baptist church in Maniche and after marriage, she transferred her membership to the Church of God, Laborde where she served as deaconess, women ministry, and women choir. Once in the US, she deployed the same zeal for God by getting involved into church ministry at the church of the Nazarene where she continued serving in various capacities: deaconess, women ministry, choir, she was in charge of prayer ministry every Saturday, she was also responsible for the group ministry in Worcester and conducted prayer ministry every Tuesday. On many occasions, Emie, happily, spoke about her gratitude to God for his blessing upon her and her family members. She was extremely self-giving, some of her siblings call her, “tant Mie” because of the way she catered to their needs; she was always ready to give whatever she had. Emie, at home, always cooked in big pots to make sure she had food for everybody. Unfortunately, a few months ago, she was diagnosed with fourth stage stomach cancer and had passed the stage for effective treatment. Emie fought the disease courageously, but it was God’s will for her to go to rest awaiting the great morning of the resurrection. On April 14, 2020, she died peacefully in her home in the company of her loved ones. Emie will be greatly missed; her natural way of helping and giving, her courage to work, her determination to care and to provide for others. However, death won’t have the last word, the grave won’t be her final dwelling. Because we have that hope that Christ will come soon and in that great morning, she will hear her Master’s voice and will come out more beautiful than ever.

Mrs. Marie Emie Joseph Octavius was born in the county of Maniche, Haiti on February 25, 1954 from a devoted Baptist family. She was the third child born from the union of Mr. Estilhomme and Mrs. Dieudila Joseph. She attended the Baptist church&#8217;s... View Obituary & Service Information

The family of Marie Octavius created this Life Tributes page to make it easy to share your memories.

Mrs. Marie Emie Joseph Octavius was born in the county of Maniche,...

Send flowers to the Octavius family.